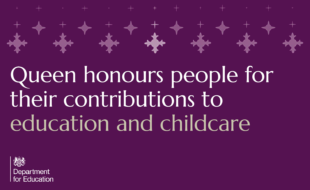 Every year on her official birthday the Queen honours people who have gone above and beyond in public service.

The list, published today, includes a number of people honoured for their contributions to education. Among them are:

Afia is a foster carer from Tower Hamlets in London. Her dedication to fostering is extraordinary.  She is a foster parent, a fostering ambassador and a member of corporate parenting board.

Nicola is the founder of Families for Life. She has played a key role in raising awareness of the risk of radicalisation of vulnerable people.

Jill is the Director of Children's Services and Chief Executive of Together for Children.  She has transformed children’s services in Sunderland.

Yvonne is the former headteacher of Oak View Primary and Nursery School in Hatfield. She is a trailblazer in education for teachers from ethnic minority backgrounds.

Aisha founded Representation Matters. She tirelessly campaigns for greater representation for students and teachers from ethnic minorities by highlighting the importance of anti-racist practice.

Graham is the independent chair of Blackpool Opportunity Area. He is a campaigner for better opportunities for young people in Blackpool.

William is academic affairs advisor at Kingston University. He has ensured students with additional needs have access to correct the support and raised awareness of the deaf society.

Bryan is the site manager at Tomlinscote School in Frimley. Bryan was instrumental in keeping the school open safely during the Covid-19 pandemic.