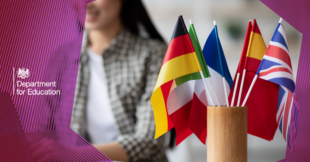 Modern foreign languages like French, German and Spanish are really useful to know – not just for visiting counties that speak those languages, but employers increasingly see language skills as highly desirable.

That’s why we are investing £14.9 million over the next three years to improve the teaching of languages and promoting the benefits of studying a language.

Why is learning languages at school so important?

Languages are a key part of a broad and balanced curriculum and evidence suggests learning a language has strong economic benefits, including improving international trade.

The British Council also identified that Spanish, Mandarin, French, Arabic, and German are the top five priority languages to improve the UK’s skills, security and influence in the world.

How are you making learning languages more accessible?

Thousands more students will benefit from high quality language teaching as part of a programme to boost the number of pupils taking languages like French, German and Spanish at GCSE and A level.

This initiative will support our ambition that 90 per cent of year 10 pupils in state-funded schools study a combination of the core academic subjects as part of the EBacc by 2025, which includes a language.

Why have you done this now?

The programme will create a network of language hubs and build significantly on the previous Modern Foreign Languages Hubs programme.

How will this programme work?

The Centre will be overseen by a centre of language teaching expertise – which could be a range of institutions including a trust, university, or business.

The scheme will also raise the profile of learning German in schools including increasing awareness of the benefits of studying it, by setting up a German Promotion Project.

Included within the investment, this project worth £400,000, will involve increasing the number of German teachers in schools and will champion German as a subject.

Are you doing similar things for other subjects on the curriculum too?

Yes. We have already successfully launched Hubs Programmes for other subjects in the curriculum including English and mathematics, linking schools across the country to subject specialist schools – also known as Lead Hubs – which can support in increasing the quality of teaching.

The Lead Hubs will engage with schools to improve the languages offer and ensure more effective transition from Key Stage 2 to Key Stage 3, as well as ensuring pupils aged 14-18 from all backgrounds have the opportunity to study languages through to Key Stage 5.