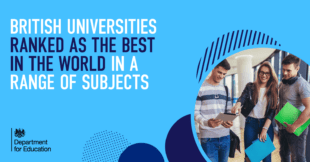 The UK is proud to have so many world-class universities that look outward and think beyond conventional boundaries. 57 of the world’s Premiers, Prime Ministers and Presidents were educated in British universities and, on average, our system has produced a Nobel prize winner every year for the last two decades.

The QS World University Rankings by Subject 2022 have shone a light on the quality of the British higher education system with our universities being ranked among the best in the world across several subjects. In over a quarter of subjects, a British department is ranked the best in the world.

It is an astonishing achievement that the UK can boast four of the world’s top ten universities as well as a quarter of the best departments in the world – this truly cements our world-class position.

In some countries if you want to study at one of the leading institutions in your chosen subject you would have to leave that country. Not so in the UK, which is why last year over two million UK students chose to stay here for their higher education.

We are a nation that leads the way with in terms of higher education and our wider reforms – the most significant in a decade – is only set to improve this by delivering the highest-quality education for students from all walks of life, equipping them with the skills to succeed and meet the needs of our nation.

The QS World University Rankings by Subject are based upon academic reputation, employer reputation and research impact. You can learn more by reading the methodology.