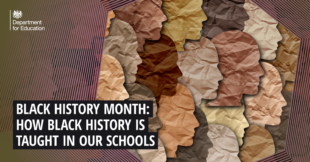 October is Black History Month in the UK and a time to celebrate the contribution black people have made over the centuries in shaping the dynamic and diverse country we have today.

Black History Month is about celebrating and sharing knowledge; celebrating the contribution black people have made to freedoms, our culture and our society – from books, music to art, with authors such as Malorie Blackman, musicians such as Arlo Parks, and scientists such as Maggie Aderin-Pocock, there are many great individuals to celebrate.

This year’s theme is ‘Sharing Journeys’, exploring the lives and stories of the people who came to Britain in the 19th and 20th centuries and helped lay the foundations of today’s diverse society, such as Roy Hackett, a key figure in the Bristol Bus Boycott.

From Roman times onwards, black people have been an integral part of Britain, and the National Curriculum supports teaching about their contribution.

One of the key aims of the history curriculum is to know and understand the history of these islands as a coherent, chronological narrative, from the earliest times to the present day. This includes how people’s lives have shaped this nation and how Britain has influenced and been influenced by the wider world, which helps build an understanding of a shared British and world history.

We want all pupils to benefit from a high quality and diverse history curriculum, which is why we are developing a Model History Curriculum for publication to be published 2024. The Department established an expert panel earlier this year to take this work forward.

Although Black History Month only happens once a year, the teaching of black history doesn’t begin and end there. The curriculum supports children learning about it all year round.

Here we look at a number of ways that black history can be taught in schools using the national curriculum for history from Key Stages 1 to 3, and the subject content requirements for history GCSE at Key Stage 4.

The inter-connection that these Islands had with the wider world is an important aspect of teaching in Key Stage 2 and 3, additionally:

As part of a broad and balanced curriculum, pupils should be taught about different societies, and how different groups have contributed to the development of Britain, including the voices and experience of black people.

There are many resources schools and parents can use to support teaching black history all-year round, including during Black History Month.

We have suggested some useful sites below:

Further resources are listed in our Black History Month post from 2021.