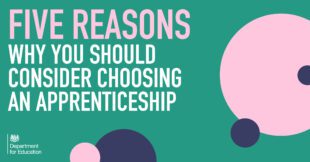 Apprenticeships are a brilliant option for people of all ages to launch their careers in a huge range of exciting industries or upskill at various levels.

There are thousands  of apprenticeship vacancies on offer, with more than 640 high-quality apprenticeships approved for use by employers – meaning someone could pursue a career as anything from a space engineering technician to a junior advertising creative.

Here’s five reasons why you should consider choosing an apprenticeship.

Apprenticeships are an exciting option for anyone wanting to gain high quality training in their chosen field because they offer you the chance to ‘earn while you learn’.

An apprenticeship is a paid job where you can learn and gain valuable workplace experience.

Alongside your on-the-job training, as an apprentice you will spend at least 20% of your time in off-the-job training with a training provider, such as a college or university, learning the skills you need to become occupationally competent.

2. You get high quality training

Apprenticeships help people to develop the necessary skills and experience to succeed in their chosen career.

Breaking it down, an apprenticeship includes:

Off-the-job training is delivered by subject experts and can include teaching theory, such as classroom lessons, lectures, online learning; practical training, such as shadowing, mentoring, industry visits; learning support; and time to write assignments.

All of this combines to provide high quality training for people to progress in their chosen sector.

3. The wide range of choices on offer

There have never been so many great apprenticeship options available in such a diverse range of sectors at multiple levels, going right up to degree level.

There are now 642 approved apprenticeships all developed working closely with leading employers so that apprentices gain the specific skills and knowledge that they need to do the job and start rewarding careers.

There’s something for everyone – from school leavers to those looking to upskill in their careers, and those seeking a career change.

Hayley Spencer is a Graduate Engineering Apprentice and Mentor with Princess Yachts, which has been hiring apprentices since 1997.

She completed a four-year engineering scheme with Princess and is now mentoring first year apprentices – passing on the knowledge and experience she has gained with the company.

Apprenticeships can unlock doors for people, and they can be lucrative. Many world-class careers have been built on a solid apprenticeship.

What you earn will depend on the location, industry and type of apprenticeship you choose.

But many employers pay a lot more and offer their apprentices a competitive salary.

The good news is that 91% of apprentices go on to secure employment or go on to further study after completing their training. In terms of earning potential, for all levels of learning in apprenticeships, earnings rise five years after study, figures for those who achieved apprenticeships in 2018/19 show.

And to give an example, one year after study, the data shows the highest earnings for those who achieved an advanced apprenticeship that year were in Engineering (£31,090), Public Services (£29,390) and Manufacturing Technologies (£29,150).

Beyond earnings, there are a range of other rewards for taking on an apprenticeship.

Learning ‘on the job’ means networking opportunities, ongoing support from the employer, peer-to-peer support, social benefits, and financial perks such as discounts and paid annual leave.

5. More and more young people are considering an apprenticeship

And finally, you’ll be joining an increasing number of young people who are considering an apprenticeship as their next step.

Some 342,000 people out of the 750,000 who have set up their UCAS account in the last six months say they are interested in an apprenticeship, according to John Cope, director of strategy, policy and public affairs at UCAS.

It comes after research released by UCAS in August 2021 suggested that more than three quarters (78%) of students who received their A level or Level 3 vocational and technical results last summer, but did not plan to immediately start a three year full-time undergraduate degree, were interested in starting an apprenticeship.

The research showed that 56% of 17-19-year-olds, who were not intending to start a traditional degree course in the autumn, considered an apprenticeship.

A further 22% said their main plan was an apprenticeship (16% higher/degree level, 6% advanced level).